For several decades, numerous indications show an acceleration of the phenomenon of global warming in the global scale. The Arctic Ocean is certainly one of the most striking witnesses there : the reheating during the last decades affects it almost twice the global average the surface of the Earth. This phenomenon is mainly understandable by the numerous feedbacks between 3 elements which are there : the ocean, the atmosphere and the sea ice. To understand the drastic changes observed in particular for 20 years in the characteristics of the sea ice in Arctic, it is essential to observe there simultaneously the ocean and the atmosphere (Gascard et al., 2011). 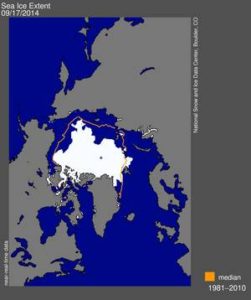 The IAOOS (Integrated Arctic Ocean Observing System) project aims at developing, deploying and maintain in Arctic an integrated system collecting simultaneously and in real time observations relative to the state of the ocean, the low atmosphere and the sea ice.

The observed parameters are chosen to complement the satellites observations and feed the operational models. For the ocean, the profiles are collected in the first 800 meters under the surface, to document at best the mixed-layer, the depth and the amplitude of the halocline and the route of waters coming from the Atlantic Ocean and/or from the Pacific. These observations are crucial to better understand the various fluxes transfers between the ocean and the sea ice or the atmosphere.

The project partners are the Pierre and Marie Curie University (coordinator) through two mixed units LOCEAN and LATMOS, CNRS through these mixed units and the Technical Division of INSU (Brest and Meudon), the IPEV and ICARE. Several private companies are involved in the IAOOS project for materials provision. NKE-Lorient works especially developing a complete Argo type profiling float to enable the collection of ocean CTD data from 800 meters to the surface.

The IAOOS equipment is based on 15 autonomous platforms working at any time in the Arctic Ocean, for a period of 7 years. Every platform, made up of 3 elements ocean / atmosphere / sea ice, drifts with the sea ice, the surface winds and the oceanic currents. They are designed to stay at the sea-ice surface and float on the surface of the ocean, with an autonomy of 2 years. 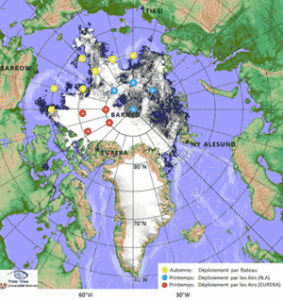 The oceanic system (figure 3) consists of :

The communication system of the platform by satellite Iridium allows at the same time the modification of the mission parameters, and the transmission of new orders following circumstances. The Argo float allows to obtain CTD profiles by moving along the cable of the platform. On the basis of the PROVOR-CTS3 technology developed for the international ARGO program, the new PROVOR SPI float was specifically developed by NKE to equip platforms IAOOS, operating under the sea ice.

The PROVOR SPI profiling float has thinned walls and can embark enough piles to allow an autonomy of 2 years at the rate of a profile a day. A system of sliding without friction was developed to facilitate the movements of the float along the cable. Finally the profiler stores the acquired data in-house and also transmits them by induction via the cable to the brain placed on the buoy of surface. This brain developed by the DT Insu sends then the data by iridium.

Several experiments in laboratory and at sea allowed at first to test the robustness of the technologies developed for IAOOS platforms. Successive deployments of prototypes of IAOOS platforms in the North Pole in April took place in 2012, 2013, 2014. Platforms derived towards the Fram Strait. The material was got back in good condition, showing its good adequacy with the Arctic environment.

The results are in the course of operation, but these first experiments led within the framework of IAOOS let glimpse advances in the observation and the understanding of the long-term variability of the system ocean / ice / atmosphere of the Arctic Ocean.

Bio-optic sensors have been integrated to the profiling float.