ARVOR C : A NEW COASTAL PROFILER TO MEASURE THE PHYSICAL ENVIRONMENT ON THE CONTINENTAL SHELF OF THE BAY OF BISCAY
article written by Carole Saout-grit carole.saout@glazeo.net

Off the French Atlantic Coasts, the Bay of Biscay is continuously under human pressure. Activities of sea transports, fishing or leisure activities in particular have a so important economic weight today as it is essential to protect the area to ensure its sustainable development. To know, in a precise way, the seasonal variability of its physical characteristics is a major challenge for a good progress of the human activities which take place there.

Since the 60s, numerous studies are thus interested to better describe the structure of the water masses of the Bay of Biscay. The study published by Koutsikopoulos and Le Cann, 1996 (figure 1) gived a synthetic representation of the general circulation of the Bay of Biscay, and its various currents. The seasonal cycle of the oceanic circulation can be summarized by a chain of two phases: 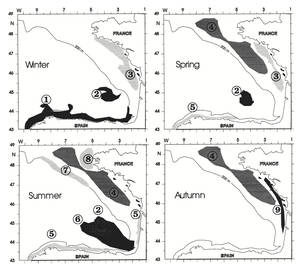 Since 2009, within the EPIGRAM program (Etude Physiques Intégrées en Gascogne et Région Atlantique-Manche), the ASPEX (Aquitaine/Armoricain Shelves and Slopes Physics EXperiment) experiment was specifically organized to collect new data. The objective was to observe then to describe the seasonal cycle of these currents on Armoricain and Aquitain shelves and banks, to succeed in understanding the mechanisms of exchange between coastal ocean and deep-sea ocean within the Bay of Biscay.

Thanks to five ASPEX campaigns (table 1), a network of 12 courantometric moorings, diving between 60 and 1500 meters deep, was maintained to observe and study the seasonal cycle of the low-frequency oceanic circulation (lower than that of the tide) on the shelf, the bank and the slope of the Bay of Biscay.

In addition to these measurements, Arvor-C coastal profilers were deployed, and maintained since 2009, to supply daily hydrological profiles of temperature (T) and salinity (S). Arvor-C is a coastal float able of profiling between the surface and the 450 meters deep. When it cycles at 200 dbar, it can make until 320 cycles, at the rate of one profile per hour, with a 15-20 cm/s speed of rise/descent. 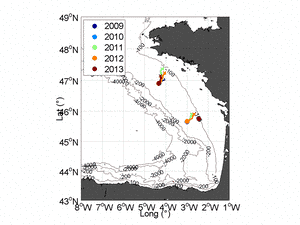 Figure 2 : Deployments of coastal profilers in the Bay of Biscay during ASPEX campaigns. © LPO/IUEM, Louis Marié

The result of ASPEX campaigns is 12 Arvor-C and 3 Arvor-Cm industrialized by NKE, industrial partner of IFREMER. Two positions of deployment were chosen (figure 2), the one on a north section close to the panache of the Loire, the other one in the South close to the panache of the Gironde, to obtain hydrological profiles along the « bourrelet froid” of Aquitain and Armoricain shelves (Vincent and Kurc, 1969).

Ten deployments of Arvor-C were made within the framework of ASPEX. Some difficulties related to the coastal domain quickly appeared, in particular the exposure of floats in trawlings and the grounding inherent to shallow depths in the zone. Since 2009, more than 660 hydrological T/S profiles were collected. Data of profilers deployed on the most southerly site are with difficulty usable, because of noisy fishing activities. Those of the profilers deployed further north are more exploitable on the other hand.

Figure 3 : Temperature and salinity profiles collected from ARVOR-C in the north part of the bay of Biscay (see figure 2). Dates of deployments are mentionned by vertical continuous black lines, black vertical dotted lines represent the start of the civil year. © LPO/IUEM, Louis Marié

Figure 4, which details the multi-annual profiles of surface and bottom, confirms that the evolutions in temperature and salinity are similar from 2009 till 2013, in spite of some inter-annual variations in particular for the year 2012 when the profiles of temperatures are hotter on surface and at the bottom than other years. The deep salinity presents an inter-annual variation achieving until 0.2 psu whereas surface salinities are on average less variable from one year to the next. The series of the storms of the winter 2013 is also visible in these data, having caused an unusual diminution of the surface salinity which joins gradually the thorough values hanging the wintry vertical mixture. 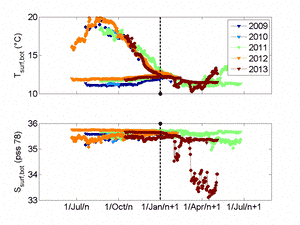 Figure 4 : Temperature (top) and salinity (bottom) measured by ARVOR-C at the surface (circles) and in depth (triangles). © LPO/IUEM, Louis Marié

These first results are very promising because, for the first time thanks to the ARVOR-C, we can observe the annual high-frequency complete cycle of stratification in temperature and in salinity in the Bay of Biscay. These data should thus contribute to a better understanding of the seasonal mechanisms of exchanges between continental shelf and abyssal plain on the zone.