New requirements for the possible use of Argo floats in some areas have emerged in recent years, especially for marginal seas and coastal areas. The development of the Iridium communication on the new generation of ARGO floats was an important new technology step to allow using these floats in marginal or coastal seas, especially to reduce the risk of grounding, trawling or impacts in these seas of high marine traffic and sometimes low bathymetric.

Especially in marginal seas, an Italian consortium called ARGO-ITALY implements the means to contribute to long-term global observation networks such as ARGO, Euro-Argo, MEDARGO, GDP, EGO and SOOP for the Italian seas, the Mediterranean Sea and the Black Sea. The aim is to provide and maintain a sufficient amount of in-situ measurements of temperature, salinity, currents and biogeochemical water properties in these marginal seas hitherto little explored in long-term and in depth. 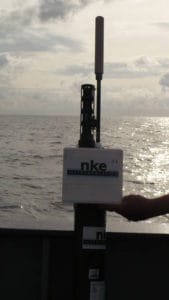 The new generation of ARVOR floats have been fitted since 2010 by NKE with a bi-directional Iridium communication , which considerably improved the duration of data transmission from the float on the surface. This new technological advance allowed a new capacity of modifying the mission parameters of the float during its cycle, thus making possible its use in marginal or coastal seas.

One of the two first ARVOR-I has been deployed at sea in february 2010 in the Adriatic Sea (figure 2). The configuration of its mission parameters has been often modified, with a cycling period varying from 2 to 5 days, a profiling depth from 1200 to 800 meters and a parking depth at around 350 meters. He dead the 2/8/2014 after 327 cycles, a lifetime of 4.5 years and more than 250 kms during this period.

Globally since summer 2010, 47 ARVOR-I floats have been deployed at sea, among which 30 are already active today (up to 15/10/2014). Those 47 floats allowed to collect more than 3500 vertical T/S profiles, mainly in the Med. Sea for 38 floats. 29 of those 38 Argo floats have been funded and deployed by the ARGO-ITALY consortium.

A recent publication of Bensi et al. (2013) uses the data of this float #1900848 together with the ones of an another Arvor also manufactured by NKE but equipped with an Argos transmission (#wmo 6901040). Both have been deployed in the southern part of the Adriatic sea between 2010 and 2012 for the MedArgo program.

The float data were used in the paper to integrate the oceanographic data obtained from the fixed platform E2-M3A, located in the centre of the southern Adriatic (see : http://nettuno.ogs.trieste.it/e2-m3a/). Indeed, merging eulerian and lagrangian measurements increases considerably the quality of the analysis for a specific topic, such as the spreading of the dense waters studied in Bensi et al., 2013. If we consider that the 2012 was characterized by an exceptional event of dense water production for the northern Adriatic, the importance of having constant measurements appears more clear. 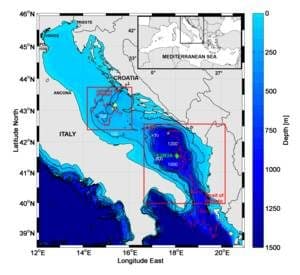 Data collected from those two ARVOR allowed to analyze the large thermohaline changes which occured in the deep layer of the SAP after the arrival of dense waters formed on the northern shelf and in the Pomo pit during winter 2012. The recent work of Bensi et al (2013) show that during this winter 2012, dense waters called NAdDW (North Adriatic Dense Water, voir [Franco et al. 1982 ; Malanotte-Rizzoli et al., 1997] appeared in the northern part of the Adriatic Sea, under the combined effect of very strong, cold and dry northern winds and a low discharge of freshwaters from the Pô river and low rainfall.

After its generation phase, the NAdDW propagated quickly toward the Middle and Southern Adriatic, driven by its large density difference with adjacent water masses. Figure 3 show in details that during summer 2011, the NAdDW entrapped in the deepest part of the Pomo pit (100 m thickness layer above the bottom) with a density of 29.00+/-0.04 kg.m-3, while during summer 2012, its densité reached 29.44+/-0.16 kg.m-3. 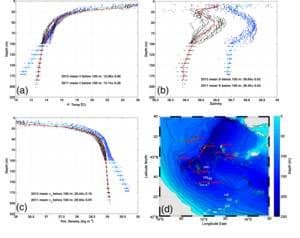