The NAOS (Novel Argo Ocean Observing System) project started in 2011 with the aim to consolidate and improve the french and european contribution to the international ARGO observing system, and anticipate the evolutions of the network during the next decade. The deployment between 10 to 15 additionial floats per year is planned for the period 2012-2019, with floats equipped with new technologies : more efficient, more ” smart “, and having new capabilities, especially for profiling in deep or polar waters or making measurements of new biogeochemical parameters.

For NAOS, 70 new generation ARGO floats will be deployed in three pilot areas : North Altantic, Arctic and Mediterranean. The french partnership between LOV/UPMC/NKE must face the challenge of deploying 33 new biogeochemical floats in the Mediterranean, with major scientific issues such as achieving confirm the eco-regionalization of the basin, characterize the atmospheric forcing and understand the temporal evolution of the Mediterranean basin over ten years. This work is conducted with the italian and bulgarian scientists implied in E-AIMS and Euro-Argo projects.

From November 2012 to July 2013, 11 biogeochemical PROVBIO-II floats, marketed by NKE, were deployed in different regions of Mediterranean Sea (figure 1), on the basis of the existing knowledge of the basin biogeography. On 25/02/2014, they collected 749 profiles of Temperature, Salinity, Chlorophyll concentration (CHL), CDOM, Backscaterring and Irradiance, which represents new observing data of the coupled physical/biogeochimical dynamic. For some floats (in green lines fig. 1), Nitrat concentration and oxygen are also sampled (344 profiles with NO3 on 25/02/14).

The strategy adopted for the deployments of biogeochemical floats in the Mediterranean was thought through the existence of 7 bioregions in the basin, well illustrated (figure 2) from SeaWifs sea-surface satellite data in D’Ortenzio et al., 2009, and redrawn in Lavigne et al., 2013. 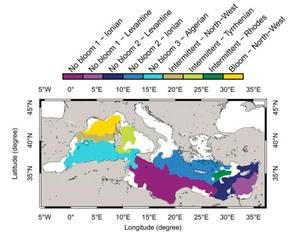 Figure 2 : Spatial distribution of 7 bioregions for the Mediterranean basin, from D’Ortenzio et Ribera d’Alcala (2009), redrawn for the study from Lavigne et al. (2013) © Lavigne 2013

The first scientific results are quite surprising if we analyze in detail the data collected from the 8 active bio-Argo floats :

A focus in the North Western Mediterranean region show the trajectory of two floats (SN035 deployed in february 2013 and SN017 deployed in april 2013 with NO3 sensor) which achieved one annual cycle of measurements in the ” Bloom ” bioregion. As shown figure 3, those two floats sampled a large bloom in april 2013, occuring after the exterme mixing event observed in February 2013, which injected large amount of NO3 into surface layers. After the bloom, from May to October 2013, oligotrophic conditions are observed with a deepening of the nitracline and the onset of a deep CHL maximum, positioned at the same depth of nitracline.

A preliminary analysis of the profiles in the Ligurian Sea by Lavigne et al., 2013 indicates that Bio-Argo observations provide a better characterization of the relationship between mixed layer and algal response, including the identification of key events of the ocean ecosystems.

These first results show for the time the eco-regionalization by satellite seems relevant, and the division of the Mediterranean bio-regions seems to offer a coherent and consistent framework for strategy deployment of new biogeochemical floats in the Mediterranean Sea.