Since the 90’s, a long industrial partnership between IFREMER and NKE allowed the development of a large family of autonomous floats for oceanic measurements. The first PROVOR profiling instrument has been built for the ARGO international program in 1999, before its new version called ARVOR (” PROVOR “+ “ARGO ” = ” ARVOR “). Based on the PROVOR technologies, the ARVOR float has benefited of many technological improvements, especially relative to its weight and size, making it both easier to deploy and cheaper.

Figure 1 details the nowadays (september 2014) geographical repartition of the Argo network by instrument types. Among the 3579 active profiling ARGO floats, PROVOR and ARVOR represent about 13% of the global network. Looking to the repartition by countries (figure 2), we also note the leadership of the US, which own more than the half of the active network (2020 active ARGO floats). The US go largely far beyond Australia (350 active ARGO floats) and the 29 other countries. 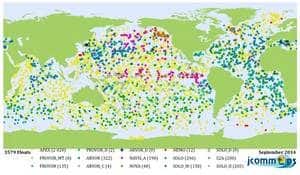 Dated october 15, 2014 : there is a total of 397 active (one current location within the last 30 days) ARVOR-Argos floats France is in the 3rd position with globally 255 active ARGO floats at sea and 161 ARVOR-Argos active floats. France, and especially its CORIOLIS component, largely contributes to the deployments of ARVOR floats at sea for the ARGO program: 60% of those ARVOR active french floats have been funded by the CORIOLIS french operational program, for its contribution to ARGO and Euro-Argo global networks. 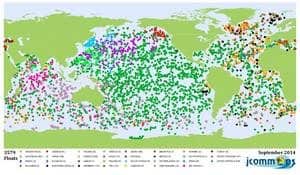 Various oceanographic program participate to the CORIOLIS network and to PROVOR or new ARVOR-Argos deployments (see table1). Since ten years, the international GOODHOPE project is one of the most active in the South Atlantic, helping developing and maintaining the ARGO network south of Africa, in a crucial region of uncommon connection between the Atlantic ocean and the two other major oceans, the Indian and the Pacific. Only PROVOR and ARVOR have been deployed by the GOODHOPE project : this explains our choice to enhance here recent scientific results obtained thanks to ARGO floats data in the framework of the GOODHOPE project.

As the initiator of the northbound branch of the Atlantic Meridional Overturning Circulation (AMOC), the Benguela Current is a key component in the large-scale circulation system that transports energy, salt, and biogeochemical tracers around the Atlantic basin. Water flowing in the Benguela Current derives from several sources, but the bulk originates as Antarctic Intermediate Water (AAIW). The relatively fresh AAIW is formed when northbound water from the Antarctic Circumpolar Current sinks below warmer northern waters. AAIW’s depth and salinity varies depending on where it is formed. AAIW from both the Atlantic and Indian oceans feeds the Benguela Current, so knowing their properties and pathways is important for understanding the AMOC.

Before the Argo programme the regional data coverage was particularly poor in the Southern Hemisphere and even more so in the Southern Ocean. Via the deployment of Argo floats that complements more traditional hydrographic cruises, the GOODHOPE project has provided and still provides an exceptionally dense coverage of the Southern Ocean region south of Africa. These data give access to a novel view and accurate estimates of transports for the upper 2000 m of the ocean and they provide unrivalled quantitative information on subsurface and relatively deep waters, such as AAIW.

In the Southern Ocean, off the Cape of Good Hope, data from profiling floats collected during 2004 through to January 2011, and CTD sections acquired at 80 stations during the GOODHOPE cruise from February to March 2008, are used to describe the Antarctic Intermediate Water (AAIW) in the southeast Atlantic sector of the Southern Ocean, and the hydrographic properties of the water masses in the region.

A total of 309 floats, representing about 92700 individual profiles of temperature and salinity located in a quadrant [10°W-40°E;20°S-60°S] between 2004 and 2011, are used to understand the origins and characteristics of the AAIW varieties. The study area was divided in subregions on the base of the regional dynamics and the frontal patterns that delimit the subtropical regions and the various antarctic Circumpolar Current jets that have shown to be relevant to the AAIW dynamics. These fronts are : the Subtropical Front (STF) and the Subantarctic Front (SAF). The front mean position, generally determined by using hydrographic criteria (Orsi et al., 1995), have been computed from ARGO floats as function of the calculated surface dynamic height. Figure 4 shows the location of ARGO profiles used in the study.

As is known, the salinity at the salinity minimum is a good proxy to identify AAIW and its primary pathways of spreading. Based on this, the first step of the analyses was to identify the AAIW layer in the data set. Maps of salinity minimum values (figure 5) derived from the ARGO data set show that AAIW distribution is nearly zonal and matches fairly well with the SO fronts. Two AAIW varieties converge in the southeast Atlantic, originating from the South Atlantic and the Indian Ocean :

The Indian and Atlantic varieties of AAIW are separated by the S-STF in the north domain ; the area north to the S-STF is largely dominated by AAIW of Indian origin.

But a new IA-AAIW variety, characterized by 34.2 ? S ? 34.3 and a potential temperature between 3-6°C, arises in the region of high mesoscale activity that characterizes the area south of Africa. Figure 6 is a schematization of the evolution of the dynamical properties of the three AAIW along their pathways.

The total volume of the three AAIW varieties, computed from the data set, show that :

Hence, these results reveal that AAIW properties are not set once and for all in the mixing layer by air-sea interactions, but they can significantly evolve in the ocean’s interior under the influence of turbulence that is particularly strong in the region of study. 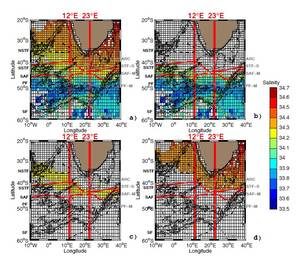 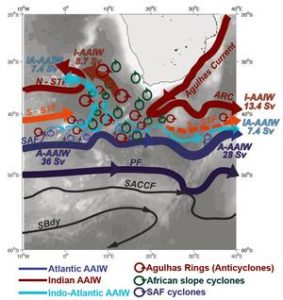